Acupuncture #9: "Urban transformation in Moss. In which way, with whom and towards what direction?" 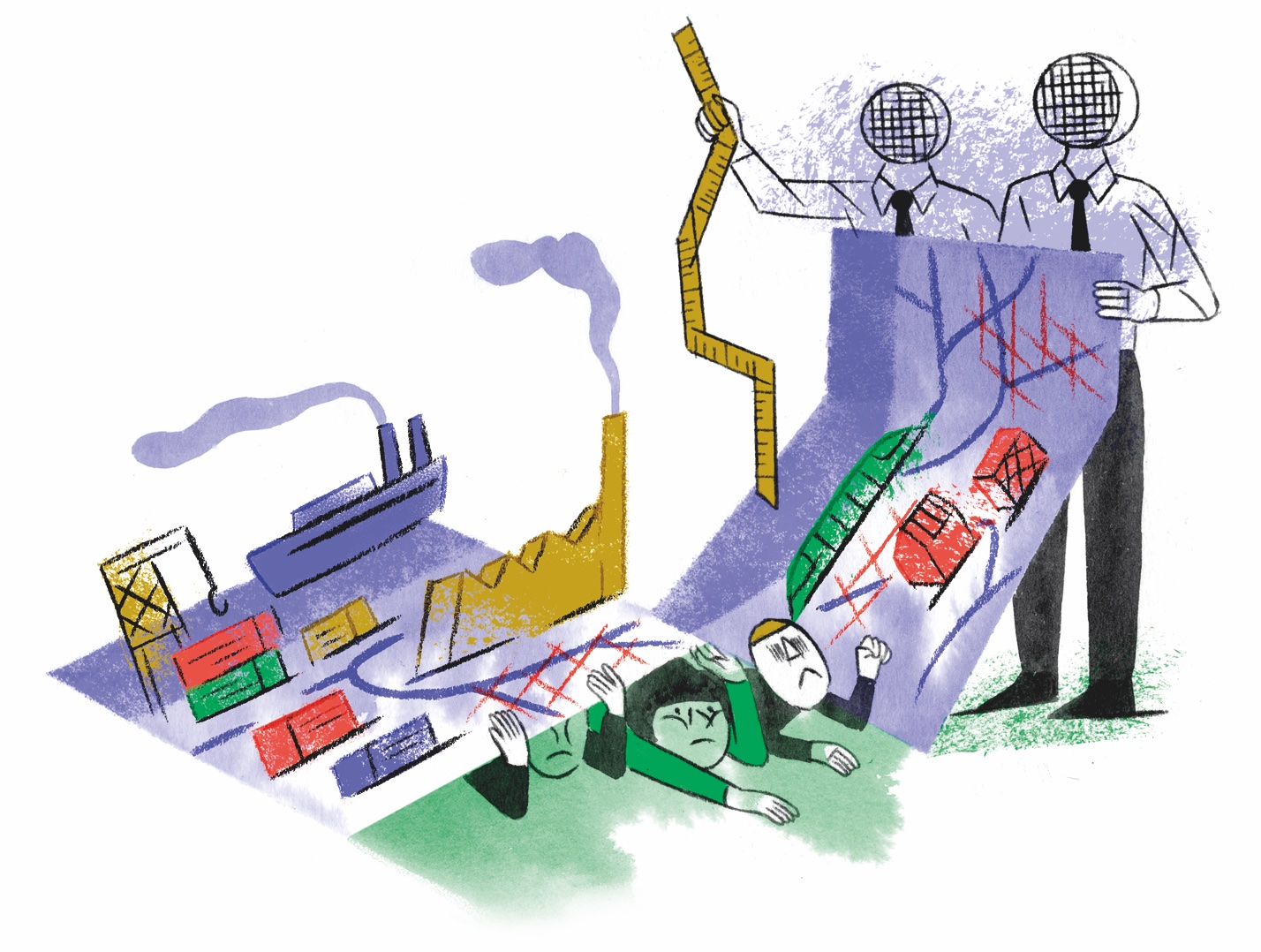 The city of Moss (NO) and its urban renewal landscape are at the centre of this ninth and final IN SITU "Artistic Acupuncture". The artist Sjoerd Wagenaar carried out his creative Acupuncture mission there, focusing his research on local participation in urban planning - in close collaboration with Østfold Internasjonale Teater.

One of the major skills and characteristics of art in public space is its capacity to penetrate the public sphere decision-making processes and contribute to it by providing different interpretations, perspectives and approaches.

Cities, towns, villages, the public areas where people meet, connect and exchange, represent the essential framework, the white page, where all human beings interweave their lives. The ecological footprints of these spaces, their accessibility, their inclusiveness, their human-friendly structures can determine the quality of life they offer or, in their absence, their social and environmental toxicity.

Some recurrent questions have always accompanied the reflection about public space, its meaning, function and value. Who builds the public space? Who is it designed for? How to enable people use it and perceive it as their own space?

In a world where around 120 new cities are being currently raised and where a constellation of new districts, neighbourhoods and countless redevelopment plans are expanding and growing fast, we need, more than ever, a critical and responsible approach to question and confront the abyss of a wild growth.

What role can art play within this context? Imagination, diversity, a sum of multiple voices, vision and creativity can contrast opaque development plans where the economic profits of the few do often prevail over the public interest. It’s worth highlighting that art in public space is not only the one taking place in public space, but as well the one that question public space and disclose its contradictions.

The Artistic Acupuncture realized in the coastal town of Moss, situated in the south east of Norway, addressed a very interesting context in which a wide urban redevelopment plan becomes the good chance to discuss about social justice, local democracy and issues of cultural identity.

As clearly explained by James Moore, curator-producer at Østfold Internasjonale Teater – the local IN SITU partner:

“Moss is undergoing extensive changes that will define the city for future generations. (…) A new tunnel will be dug and the station complex will be built for the train, and there will probably be major changes in the container port and at the ferry terminal. Although the project has been known for over 20 years, severe conflicts have recently arisen with strong involvement from the citizens. There have been concerns about the basic conditions, costs, damage to the remaining buildings in the area, and disagreement over which solutions are best suited for future needs”.

In a small but very congested area, the entire system of mobility and transport will be redesigned. The ferry lines that connect Moss to Horten – east and west side of the Oslo Fjord – the main road, the train station and the port, will all be reshaped to give a new footprint to this important commercial town which is just 60 kilometres south of the Norwegian capital city. Alongside with the transport network, the whole urban space will be consequently transformed: but the how, by whom and for whom are still unclear. The main stakeholders are local and national public entities – e.g. the Municipality of Moss or Bane Nor Eiendom, the Norwegian Railway Agency – who seek their interests and investments, engaging in the redevelopment plan through very limited mechanisms of local participation.

According to Hanne Tollerud, Mayor of Moss:

“My concern now for city planning, for nature and culture, politics, environment, is how the politics and the people are polarised. That scares me a lot. Two or three years ago you could see a map all over the world showing the polarisation, but we also see it now in our local community. The problem is when you ask people who are very active in the debates regarding the railway or Sjøsiden, when you take politicians from different parties or local activists with strong opinions: sometimes I wonder what they really mean about participation. (…) I think that’s the main issue. Because I meet a lot of people who are not active in the newspaper, not active in the political parties or the debate, but they mean a lot and they never get the opportunity to express their opinions”.

Even if the municipality states that they would like more participation, the local community is rarely involved in the decision making process.

Who can participate in the processes and decisions, and on what premises? Who will benefit from the developments, and what does this say about society's values? Who is this development for? What is most environmentally responsible? What character of town do the citizens want? 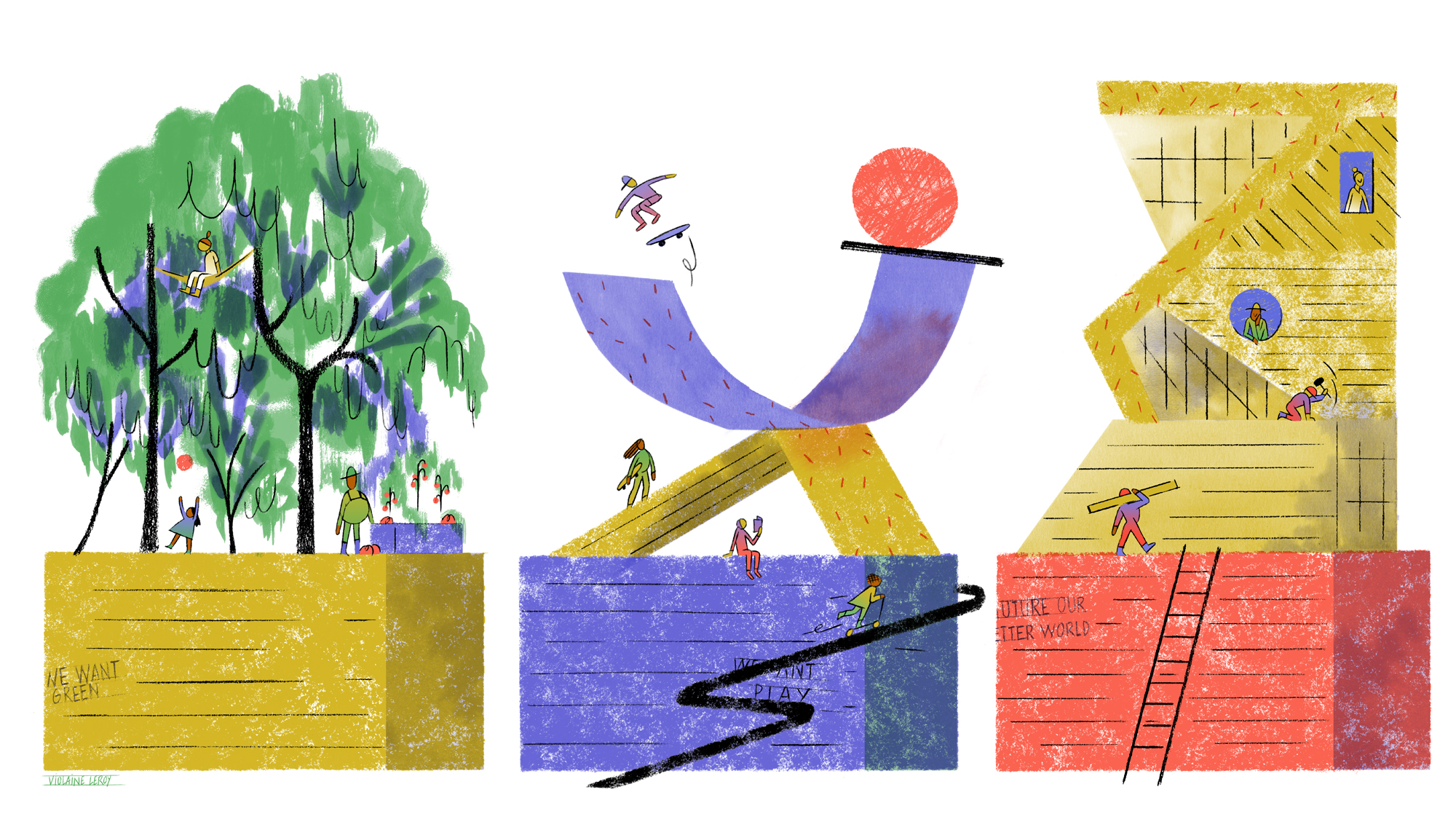 'Everything is a composition, also the future’. With this perspective, through a process of generating questions and reflections, and through the method of penetrating the public sphere and engaging in dialogue with a number of stakeholders, the artist has envisaged his artistic proposal with different steps and layers.

According to the artist, make the town greener, reduce CO2 and build up a new neighbourhood entirely out of wood, would be some of the more relevant actions to go behind. The citizens of Moss should use architecture as a way to think about a different future, no longer with concrete, but with wood. A Wood-World, as named by the artist, would put emphasis on a precious, local material that represents at the same time a symbol of the Norwegian identity and a strong environmental statement.

In order to create awareness and stimulate the people’s participation, it is therefore essential to generate a sense of identity around a local and symbolic material and with a common, tangible, purpose of improving the life conditions of the local residents. But, how to do that in a context where there is a deep lack of information? Apparently the meetings organized with the landowners and stakeholders have been primarily focused on presenting the renewal plan, rather than inviting local citizens to participate actively in its design and development. Reversing this process became then a fundamental layer of the artist proposal: through the ‘Billboard movement’ and the ‘Statement factory’, Sjoerd Wagenaar suggests a series of visible actions – by printing and placing citizens’ messages – that would trigger new means of communication. Empty walls of the houses that have been removed, abandoned buildings and factories, billboards spread around the town, would become the channels where to unleash the people imagination and display their statements. An act of placemaking where the local citizens are asked to present their visions and ideas about Moss, its identity, its culture and its future developments.

This multi-layered process proposed by the artist is essentially focused on generating a strong sense of unity and its last layer foresees a common mission for Moss: a city candidature to become European Capital of Culture 2026. For the artist is important to have “a dot on the horizon that you can work towards, an impulse to plan faster. Having a mission in the future helps people to fantasize about what could happen and what could be done. It creates movement and people start dreaming”.

The Area Regulation Plan is not started yet and there is still enough time before the plan will be activated. The visions, ideas and methods proposed by Sjoerd Wagenaar are willing to shake the ground, reframing the map and the position of the different agents involved and trying to include those that have been forgotten. When the nature of a public discourse becomes unhealthy, ambiguous and unclear, it’s time for change and for the search of alternative answers.

An Artistic Acupuncture emerges therefore as an excellent methodology to penetrate into a complex scenario, inject fresh ideas and redefine the process at stake.

[1] As explained by The Town Paper: “A charrette is an intensive planning session where citizens, designers and others collaborate on a vision for development. It provides a forum for ideas and offers the unique advantage of giving immediate feedback to the designers. More importantly, it allows everyone who participates to be a mutual author of the plan”. http://www.tndtownpaper.com/what_is_charrette.htm